Frank Lloyd Wright is a nearly mythic figure, a paradigm-tweaking genius whose Betty Crocker hair, faraway look, and habit of wearing capes only added to his mystique—a mystique genuinely anchored in Wright's startling genius for redefining the Possible in American architecture. One of the more famous FLW structures can be found just outside Phoenix, Arizona. The building looks like a 50s-era drawing of a utopian future home, and is a jarring anomaly in the scrubby foothills of the McDowell Mountain Range. The place is called Taliesin West, and from both a construction and design standpoint, this legendary Frank Lloyd Wright building adds a bit of mythic architectural seasoning to Procore’s Groundbreak meeting in Phoenix, October 8 – 10.

In his long creative life Wright designed some 1,000 structures—and 532 of them even got built. From the iconic and supremely organic Fallingwater (adjudged by the American Institute of Architects "…best all-time work of American architecture"), to the deliberately modernist Johnson Wax headquarters, Wright’s varied and closely observed career mixed the practical and the high-flying in a portfolio whose every project sparkles with that weird and indefinable FLW genius.

Yes, Wright was a mercurial oddball and magical thinker who could radiate “ethereal dreamer” and “foot-stamping jackass” in equal measure. He knew what he wanted and did not suffer fools. He saw geometrical relationships and structural flow that others simply couldn’t apprehend, and around those ephemera he wrapped buildings that still inspire wonder. He seemed, and seems, almost an architectural seer. But like any ordinary mortal, Wright grew weary of the bone-biting winters of his Wisconsin birthplace, and in 1935 began an annual pilgrimage to the Phoenix, Arizona area, whose dry heat and austere landscapes appealed to both his sense of design style and distaste for frostbite.

By 1935 Wright had established a posse, a strange coterie of architecture students, acolytes, and apprentices whom it was his intent to mentor into an architectural mode of perception he considered essential to the future of design. He called his Wisconsin commune—whose lofty goal it was to form a cohort of cultured artisans—The Taliesin Fellowship; the group's dramas and intrigues have been well documented.

This original Taliesin, located in southwestern Wisconsin near Spring Green, remains today an historically preserved site and learning center. Back in '35, though, Wright was looking for a warmer place to winter while still carrying on his educational mission. When he decided to spend his winters in Arizona, his Fellowship gang and their families naturally followed. When they first arrived, in fact, the Fellowship students—following Wright’s exacting design and instructions—would actually build Taliesin West for him. The pricey coup de grâce of the wondrous but bone-dry experimental desert house would be Wright's incessant drilling for the water needed to make his new digs habitable. He would end up drilling down nearly 500' at a cost of some $10,000 before finding life-giving H2O.

Wright strongly believed that his structures should be—by and large—built from local materials, making the buildings physically resonant with their surrounding landscapes, whether rural or urban. He saw in Arizona’s natural geometry “low, sweeping lines, (and) uptilting planes”, and even invoked the Gila monster and cholla cactus as design inspiration for the desert school and design studio. Yeah, Wright literally thought outside the box. Taliesin West was largely built using plywood forms into which were packed a mixture of poured concrete and locally curated (lifted with difficulty, that is) desert stones from the immediate environs. 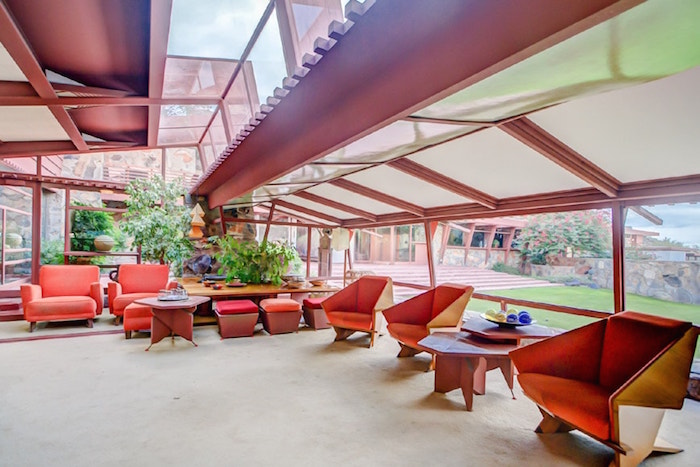 Design-wise, Taliesin West's open floor plan anticipated later 20th century preferences for a living space that mimicked somewhat the freedom of the out-of-doors, and the design also featured indoor-outdoor spaces where rooms could actually be opened to the outside, weather permitting. The Garden room, for instance, opens out in a way that literally frames the desert landscape for relaxed viewing and inspiration.

Wright was also enamored of natural light in living spaces, and is considered a pioneer in building designs that parlay available light as a practical, usable, and psychologically healing augment to electric lighting. Taliesin West features dropped roof edges for blocking the direct blast of harsh desert sun, while canvas roofs (since replaced with similarly translucent but hardier materials), high and mitered windows, and tactically placed skylights fill the Taliesin space with a diffuse natural luminescence bearing the tones and colorations of the surrounding desert.

Today, the building houses The School of Architecture at Taliesin, as well as the Frank Lloyd Wright Foundation. While attending Groundbreak this October, consider a visit to Taliesin West. Wherever construction pros are gathered, it could be said they are in one way or another paying homage to Frank Lloyd Wright, and all designers who spend their professional lives seeing their artwork made real by a construction sector whose paintbrushes are hammers, cranes and software.

Each year Groundbreak brings together a community of global construction professionals to discover, learn, and innovate....

During Groundbreak 2021, Morgan Stanley’s Carla Harris discussed why having an inclusive culture rooted in belonging is more important than ever before....